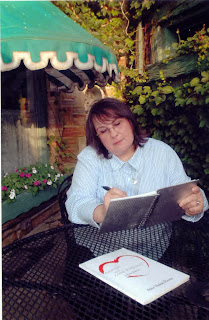 Alice Vedral Rivera aka AVR is a poet, writer, lyricist, spoken word artiste and fledgling amateur photo artist.  Ms. Rivera is a Czech-American who speaks, reads and writes Czech fluently even though she was born in a refugee camp in Germany and grew up in the Chicago area.  As a child, she read anything she could get her hands on.  She loves words – “the way they look, the way they sound, the way they feel in your mouth as they roll around your tongue”.

Three of her poems were published in the inaugural issue of The Poemhunter Anthology in 2005 and her poem, Mother of Cities (the first of her on-going Prague collection of poems), was published in ‘Prague Tales’ in 2007.  Her first book, “Dearest and Most Precious: A Love Journal” (poetic prose), was published in 2006.

She writes lyrics for her cousin’s band, ‘Ciba & Rhythm on 22nd’, whose first cd was released in May of 2007 featuring 8 of 12 songs with her lyrics. In addition, she recorded a spoken word cd of her poems, ‘Intimately Yours’, with Chuck Berglund’s soundscapes late in 2007.  In 2007 and 2008, selections from both ‘Intimately Yours’ and ‘Ciba & Rhythm on 22nd’ were played (as part of their regular ‘Featured Artists’ broadcasts) on two internet radio stations – one in the UK and one in the US.

She is a past contributor to German poet Ulrike Gerbig’s forum for women ( a place women could post their ideas, poems, stories, paintings, songs and photos) and currently a contributor to The Artist In You Blog.

"The T. Collection", poems about a relationship she had in 1971 was published late in 2013. In 2014, she published "Shadows on the Carpet" as a trilogy (I,II, III) with 3 sections in each book. The books are compilations of her darker poems many of which are multi-layer relationship/social/political commentaries. Book I is the descent into the abyss, book II is the journey through the darkness and book III is hitting rock bottom and rising back up to the light.