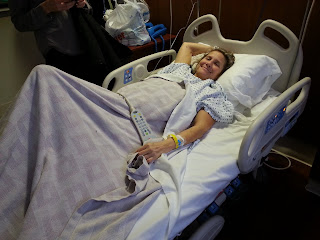 We ended 2015 with one of my younger sisters going into cardiac arrest twice on Dec. 29th. She was in the hospital one month - 1 week in ICU, 1 week in CCU and 2 weeks in the rehab ward. After coming out of the induced coma, our sister's memory was impaired and someone needed to be with her 24/7 in the hospital so family and friends took turns being there with her. Physically, she progressed well, but her memory (long term & short term) was not there.

January was an especially trying month. I spent 13 days at the hospital with Paula and one day with her after she was released. In between this, I had to take mom to 2 doctor's appointments, the ER and for a cystoscopy; then I spent one whole day taking care of my parent's medical insurance paperwork. I had 6 doctor's appointments of my own.

During this time, my brother's condition was rapidly deteriorating, especially since the family visits he was used to were drastically reduce as our focus was on our sister. On January 19, I drove my parents and our priest to see my brother. It was a good visit even though he had lost a lot of weight and hospice had to bring in a hospital bed for him. My car was not running properly most of the month, so I was never sure if I would make it to where I was going or back home, but there was no time to take it to the mechanic. Our brother hung on till they let Paula out of the hospital and family took her to see him. One of my sisters took me to see him on the 25th and it was obvious it would be a matter of days before he died. He passed away that Friday. My husband and I drove out to his house on Saturday to see if there was anything we could help his wife with. I am amazed at the quality of care my sister-in-law was able to give my brother while he was in hospice. I don't know how she was able to handle it even with all the help everyone tried to provide. She is such a loving, caring woman and my brother never truly appreciated her like he should have. We ended January with a celebration of our aunt's 95th birthday as we tried to process our brother's death two days before. February started with our brother's wake and a memorial luncheon several days later. My brother's death hit me hard, but there was no time to grieve.

Because our sister was on Medicaid, no outpatient rehab center that was qualified to handle her issues would take her. The hospital was kind enough to provide some follow up outpatient therapy for free but only for a few weeks. We were unable to leave Paula alone. She would freak out because she didn't know what had happened to her or why she was there (if she recognized her surroundings) or where she was (when she didn't recognize her surroundings). We ended up passing her around from one daughter or sister to another. Because we were family, most of the time, she refused to do what the therapists said she needed to do to regain her memory and she bristled every time we would try to help by reminding her that she needed to shower, brush her teeth, etc. It was not easy for any of us.