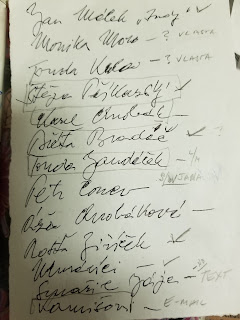 My parents really liked the new caregiver and she took exceptional care of our mom and dad so my husband and I started 2017 by visiting my son and the family in Nevada for ten days. My daughter-in-law had made plans to make our visit a fun and relaxing one. Both she and my son took off of work to spend time with us. My honey and I spent our last night at the El Dorado in Reno in one of their spa suites. We had really worked hard on getting caught up with laundry and house cleaning and organizing before we left. While we were gone, one of my sisters came over and dusted, vacuumed and generally cleaned everything so we returned to a nice clean house.

The year was starting out well even though my hubby had a lot of doctor's visits in January. I was tired of the gastrointestinal issues that had me cancelling plans at the last minute and I finally had time to make an appointment with a specialist toward the end of February and set up future dates and times for the many tests he ended up ordering. I felt like I was beginning to decompress. I started to breathe again – slowly.

As dad was celebrating his 90th birthday in February, his friends wanted to make it special.  Dad had me come over and started writing down the names of the people he wanted at his party. He wanted me to make sure that they all showed up so I started making phone calls. Most of the people on the list were already planning on being there, but I had to call and make sure per dad's instructions. Dad kept adding more people to the list and so I made more calls. I enlisted the help of some of the people that were taking care of most of the plans for this celebration for my dad. I have to say that most of the people dad wanted at the party were there. Only a few couldn't make it because they were out of town/state/country. Many people worked on making this a special day for my dad and our family is so very grateful. There were around 100 guests at his party and his musician friends played his favorite songs and performed funny 'old people' skits. Others cooked and baked and everyone contributed time and money to make this a truly memorable day. He was, also, awarded a special medal from Chicago's Czech Consul General for his work at Radio Free Europe and keeping the Czech culture alive in the Chicagoland area.

Let me share with you this video of his party that our friends were able to put together and edit for a memorial service earlier this year.

My dad had always said that he would be here until he was 100. How could we know, that a month and a half after his party, he would be gone.