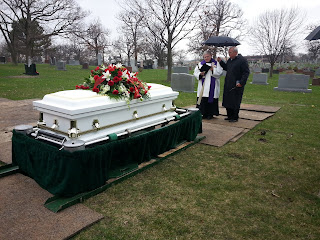 Mom hadn’t been feeling well most of February and so she missed dad’s party. She hadn’t wanted to go to the doctor, and since her symptoms were flu like and weren’t life threatening, we didn’t force the issue. She was feeling better but was weak when I took her for her primary care appointment in early March. Her doctor prescribed at home physical therapy, occupational therapy and had a nurse come by to check on her once a week for 4 weeks. The caregiver had scheduled a trip to the Czech Republic but we didn’t want a replacement for the time she was to be gone as mom and dad said they could handle it. In the meantime, I was starting the battery of tests the GI specialist had ordered at a pace of one per week.

I took dad to his cardiologist appointment on a Thursday late afternoon where he was told (after the doctor reviewed the results of his echo-cardiogram) he had the heart of a much younger man (not a 90 year old), that it was safe for him to fly to the Czech Republic to see his family and that the cardiologist would see him in a year. On Sunday night, dad was planning his trip to visit with his family with them via Skype. He was joking that he had forgotten to ask the doc if he could chase the young women but that he realized he couldn’t because of his bad knee. On Monday morning, he was gone. He hadn’t responded to mom over the intercom and when she called me, she said he didn’t respond to her after she went upstairs to his room. My husband and I had just ordered breakfast at a restaurant after having blood drawn at the hospital for tests that our respective doctors had wanted. I told mom to get ready to open the door as I was going to call the paramedics and that I would be there as soon as I could. We had the waitress pack our food to go, paid and ran out the door.

The police officer that met me at the house told me that he was sorry but my dad had passed away. He said he was sitting in his chair looking peaceful with the TV on.  I was in shock.

I answered the officer’s questions but I didn’t want to go upstairs to show him my dad’s meds (he was only on a few - for gout, high cholesterol and they had just prescribed a very small dose of blood pressure medication). I needed to call my sisters and make the arrangements and I would have lost it if I had to go up to see him. My husband went instead.  Mom asked me to call their priest first and I did. Because we normally send texts to communicate, my sisters knew it had to be an emergency if I was calling and leaving a message to call me back. All of them thought I was calling about mom and when I said it was dad who died, they all went into shock. Everyone said that they would be over as soon as they could.

The officer said he couldn’t leave until the body had been picked up so I had to ask mom what funeral home to call. She said she wanted the funeral home that took over from one that had closed a few years earlier. She wasn’t sure of the name but it was in Berwyn. My husband looked up the funeral homes and mom said she thought she recognized the name. I called and made arrangements for them to pick up dad. My sisters started to show up and to notify their spouses and children. We wanted to make sure that everyone from out of town would be able to make it so we scheduled the funeral for a week later with the wake on Sunday.  That evening, all of us sisters, my husband and a close friend went to the funeral home to make the arrangements. We had one sister on video chat, and together, we picked out the casket, cards, etc. and made a list of what else was needed.  When we returned to mom’s, my sisters picked out the clothes and I looked for the cemetery plot information as our parents, along with our aunt, had paid for them years ago.

We couldn’t leave mom alone and even though Paula had memory issues, she was the logical one to stay there. She didn’t want to but we told her she had to as mom couldn’t be by herself. She asked what she needed to do and we ran down a list of things and told her she should call me if needed.